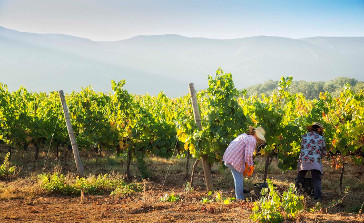 Following a drought that affected most of Portugal during 2015, the first semester in 2016 was very rainy. Budbreak occurred 15 days later than usual and there was a significant risk of mildew and oidium attacks, given the high level of moisture and mild temperatures, but we treated the vineyards correctly and avoided most of these issues. At the end of May, the temperature rose considerably and June, July and August had very warm weather with very low temperature range variation. Veraison occurred 15 days later than usual and everything was indicating that we would have a late harvest. However on August 19th we started harvesting in Azeitão, 24th of August in Reguengos, Alentejo, and 12th of September on the Douro Superior Given the high temperatures, the maturation was achieved in a somewhat uneven way within the bunch, resulting in wines with good color, very nice aromas typical of the varieties, fruity palate, but unbalanced acidity. The yields in our vineyards were above 2015, only being affected by the very rainy Spring which made it challenging for the tractors to enter some of our vineyards in clay soils. In retrospect, 2016 was an above-average year, except for the Vinho Verde region where the quality is very good and also some vineyards that had very low yields and where the high concentration overcame the challenges derived from uneven maturation of the grapes. Check our harvest vídeo here.