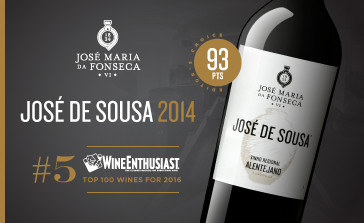 The prestigious American wine magazine Wine Enthusiast, published in the December edition, the TOP 100 best wines of 2016, distinguishing José de Sousa 2014 as the 5th best wine of the year, rated 93 points and considered the "Editor's Choice". "It is with great pride that once again we see our work being recognized across borders, in one of the most recognized International wine publication. Being fifth in the Wine Enthusiast Top 100 rating is the recognition of all the work developed by our winemaking team and a very important award not only for the company but also for the Alentejo region as well as for all Portuguese wines. It is also a tribute to the artisanal method of producing wines in clay amphorae "states António Soares Franco, President of José Maria da Fonseca. José de Sousa, produced in the Winery with the same name in Reguengos de Monsaraz distinguishes itself for being partially produced in clay amphorae, an ancient wine production technique, already used by the Romans. The flavors of the wine acquire unique aromatic characteristics. The history of this winery dates back to the sixth century, where the first wine production records date back to 1878, making it one of the oldest wineries in the Alentejo. The Agricultural house of José de Sousa Rosado Fernandes was acquired by José Maria da Fonseca in 1986 and from that date the company made significant investments in the vineyard and in the recovery of the clay amphorae, so distinctive in the production of this wine. Nowadays, the José de Sousa winey is unique in the extent of the use of this vinification technique, having 114 clay amphorae for the production of the wines José de Sousa, José de Sousa Mayor and J José de Sousa. The recovery of this ancient art f production had very positive effects on the market Wine Enthusiast is a prestigious American wine magazine. Established in 1988 by Adam M. Strum currently reaches 800,000 subscribers worldwide.