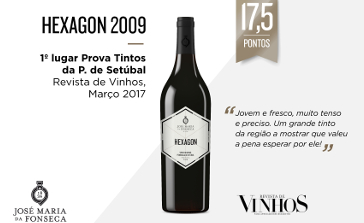 In the March issue of Revista de Vinhos, Portuguese wine magazine, Hexagon 2009 was awarded 17.5 points, being considered the top wine from the Península de Setúbal and was one of the wines highlighted in the cover of the magazine. Described by wine critic Nuno Oliveira Garcia as “young and fresh, very tense and precise. A great wine from this region, showing that it was worth waiting for it”. Other two wines that also received the highest scores were Pegos Claros Vinhas Velhas Grande Escolha 2013 and Quinta da Bacalhoa 2013. Six grape varieties, six generations and six sides. Produced from Touriga Francesa, Touriga Nacional, Syrah, Trincadeira, Tinto Cão and Tannat, all planted in our vineyards on the Setúbal Península. The grapes were foottrodden in stainless steel “lagares” and fermented for six days with full skin contact at temperatures of 28ºC. The alcoholic fermentation was finished in oak casks and underwent battonage for the next 3 months. This was followed by 12 months ageing in new French oak casks. Hexagon embodies the pursuit of excellence that has inspired the Soares Franco family throughout time. In the 2009 vintage 9100 liters of Hexagon 2009 were produced. In the November issue of Robert Parker’s Wine Advocate, the Hexagon 2009 had been rated with 94 points and considered the best red wine of the region.