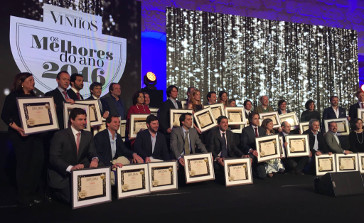 Last February 17th, the Moscatel Roxo 20 Years received the award of “Excellency” having been considered by Revista de Vinhos, the Portuguese wine magazine, as one of the top 30 wines of 2016. Setúbal Roxo 20 Years Old is an exquisite dessert wine produced in Portugal on the Setúbal Peninsula, a region south of Lisbon which was recognized as a D.O.C. in 1907. This grape variety is almost extinct, existing only in a small vineyard in Azeitão. This is a purple grape variety, with an intense spicy aroma and a very concentrated and fruity palate. This wine is a blend of 4 vintages, where the youngest wine is 23 years old and, the oldest, 80 years old. Aging takes place in used oak, since the truly important result is oxidation and not the oak aroma. Also during this award ceremony, the Periquita Superyor 2014, the José de Sousa 2014 and the Moscatel de Setúbal Alambre 40 Years Old were considered the “Best of the Region”. José Maria da Fonseca is the oldest producer of Moscatel de Setúbal wines, with over 180 of history.