BRANDIES OF JOSÉ MARIA DA FONSECA HAVE A NEW IMAGE 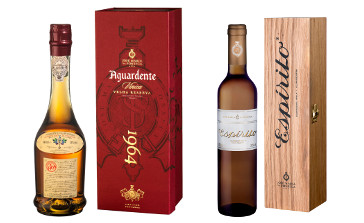 The brandies of José Maria da Fonseca have recently undergone an image upgrade, with more elegant and premium packagings. José Maria da Fonseca has a century-old tradition in the preparation, aging and bottling of quality brandies. In the course of the last century, these products became known as “Cognac Moscatel”, awarded with gold medals in several international exhibitions. Later these were renamed Aguardente Espírito, produced with base still wines from Moscatel de Setúbal, which provide its unique delicate character and elegance. Aguardente Espírito is a unique brandy, with over 40 years of ageing in oak casks. The Aguardente Velha Reserva is a brandy from the 1964 vintage, and was distilled in the Vinho Verde region in stills owned by the Vinho Verde Winegrowing Commission, under the careful supervision of António Porto Soares Franco. With over 34 years of ageing in used oak barrels, the result is a brandy with golden colors, with flavors of walnuts and hazelnuts and with a very long aftertaste.