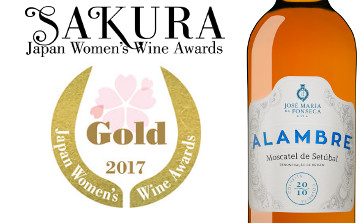 José Maria da Fonseca was recently highlighted in the “Sakura Japan Women’s Wine Awards”, the major wine competition in Japan, which has a pannel of judges that is only composed by women. Alambre Moscatel de Setúbal 2010 received Gold Medal. This year’s competition had more than 4.200 wines from 37 different countries judged by more than 400 women. The wines were evaluated by a panel of “sommeliers”, “chefs”, jornalists among other female specialists. According to the organization of this competition, the fact that the jury is composed solely by women, is due to their growing influence in the Japanese market, selecting and buying wines and travelling to different wine and gastronomy location. “Many women are doing trainings in wine schools and enjoying the art of tasting. Women are the leaders of the Japanese wine market and the key to success is understanding their preferences and taste profile” mention the organizers of the competition. To learn more about the competition and the awarded wines visit http://www.sakuraaward.com/en/result/index.html