LANCERS GETS DRESSED FOR SUMMER

LANCERS CREATES A SPECIAL EDITION FOR THE SUMMER 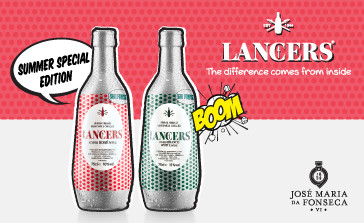 Lancers challenged the students at IADE - Universidade Europeia, the most important design university in Portugal, to design the Lancers special summer packaging. Soraia Morgado was the winner of this contest, having been awarded the first prize. She now has the opportunity to see her creation brought to life in this special edition of Lancers. The selected proposal is aligned with the core values of the brand, alluding to the Pop Art and cartoon movements, bringing alive a modern concept of vintage. Lancers presents itself in a fresh and young mood and will be the perfect relaxed drink for the summer. This new special edition will arrive now to the market in the rosé and white versions and will be launched not only in Portugal, but many countries like the US, Italy, Spain, Germany, France, Belgium, Luxemburg, Brasil, Mexico and China, among many others. Lancers Challenge IADE The challenge from José Maria da Fonseca was coordinated by the Professor team at IADE and involved the students of the 2nd year of the Communication Design degree at IADE - Universidade Europeia, the most prestigious design institution in Portugal. The contest involved 150 students over a period of 3 months, who responded to the Lancers briefing. The selections process took place in two stages, the first coordinated by the Professor team which resulted in 16 finalist proposals. In the beginning of December, the team at José Maria da Fonseca evaluated the proposals and selected the best 5 that were best aligned with the initial briefing. The Selections criteria were the coherence and alignment with the Lancers DNA, the technical feasibility of the design and the adaptation to the market. The winner was revealed in January 2017 and arrives now in the market, with the special summer edition. Lancers – The difference comes from inside!