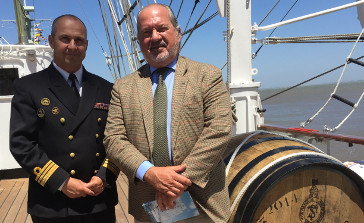 José Maria da Fonseca accepted the invitation from the Portuguese navy to repeat the Moscatel “Torna Viagem” (Return Trip) on the latest voyage of Sagres, the Portuguese tall ship. On April 27th, the tall ship Sagres set sail from Lisbon on a trip that will last 4 months and will pass by several ports in Africa, South America, will be in Rio de Janeiro for the celebrations of the Portuguese National Day on June 10th, and will finally arrive in Europe. Aboard the tallship will travel a cask of very old Moscatel de Setúbal, which vintage will be revealed upon its arrival, a cask of Bastardinho 2011 and two casks of Moscatel de Setúbal 2016. The return to Lisbon is scheduled to occur next September and is highly anticipated due to the changes that the wine will suffer during this voyage. Domingos Soares Franco, senior winemaker at José Maria da Fonseca states that “according to previous experiences, we expect that the wine will have significantly developed during the trip, achieving a superior quality, with a deeper and darker color, and different aromatic and taste characteristics from the testimony wine that is resting in our cellars”. The last trip of the “Torna Viagem” Moscatel, took place during 2016, when the tall ship Sagres traveled to Rio de Janeiro for the celebrations of the Olympic Games. Previous trips occurred in 2015, 2010, 2007 and 2000. On all of these journeys, it was proven that the wines which had travelled were of superior quality to the ones of the same vintage that stayed in the cellars in Azeitão, that are called “testimony” wines. All of these experiences had a scientific research objective and the wines are now part of the company collection. It is not foreseen that they will be sold in the next decades. These casks can be visited in the José Maria da Fonseca cellars in Azeitão. The winemaking team at José Maria da Fonseca describe this wine as “a more elegant Moscatel, more velvety, with added complexity. It is a unique a magnificent wine”.