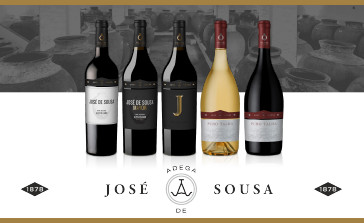 In the heart of Alentejo, in the village of Reguengos de Monsaraz, the José de Sousa winery presented its new labels for the iconic José de Sousa, José de Sousa Mayor and J of José de Sousa. The new labels focus on the identity, history and prestige that are trademarks of this winery that dates back to the XIX century. Also know as the clay pot winery – because it holds an exceptional collection of 114 amphoras – José de Sousa has launched its two new wines Puro Talha, that have been fermented 100% in clay pots, in the same way the romans were producing wines over 2000 years ago. These new wines will be available from October. The range of José de Sousa wines, aims to continue the legacy from the classic wine Tinto Velho José de Sousa 1940, an iconic reference in the Alentejo region. The production of this winery dates back to at least 1878, using a traditional winemaking fermentation technique in clay pots. The vineyards where the José de Sousa and Puro Talha wines originate, are located in Reguengos de Monsaraz, one of the most prestigious sub.appelations of the Alentejo and home to some of the oldest vineyards of the region. In these soils of granitic composition and with excellent sun exposure, are planted the traditional grape varieties of the Alentejo, such as Trincadeira, Aragonês, Antão Vaz and also the lesser known Grand Noir, Moreto, Manteúdo and Diagalves. Planted by José de Sousa himself since the early 1950’s the average age of these vineyards is about 30 years old. The perfect combination between the terroir and the grape varieties, the harvest of the old vineyard separating the different grape varieties, and the traditional methods such as foot-trodding and the fermentation using clay pots, provide a unique character and identity to the José de Sousa wines. The acquisition of the José de Sousa winery in 1986 by the Soares Franco family, allowed for important investments in the vineyard and also in the purchase of a large collection of clay pots, providing a renewed life to one of the oldest producers of the Alentejo. Techinical Information JOSÉ DE SOUSA 2015 JOSÉ DE SOUSA MAYOR 2015 J DE JOSÉ DE SOUSA 2014 PURO TALHA BRANCO 2015 PURO TALHA TINTO 2015 About José de Sousa Winery The winery José de Sousa Rosado Fernandes exist since 1878 and was acquired by José Maria da Fonseca in 1986, in order to fulfill the long-held dream of producing wine in the Alentejo, a portuguese region loaded with prestige and history. Located in Reguengos de Monsaraz, this winery keeps alive a tradition initiated by the Romans over 2000 years ago. It is equipped with 114 clay amphorae, a fermentation method as rare as it is old. The old cellars are below ground level and contain the urns and two open presses for treading the grapes. There is also a new winery equipped with 44 stainless steel vats and all the essential technology for making red and white wines. This is the perfect place to witness the marriage of old and new and to learn more about some exceptional wines. In the José de Sousa winery, several ancient vinification techniques are still currently in use, but the most important one is definitely the fermentation in clay amphorae. The core of this technique has changed very little during the centuries. In this process the grapes are first pressed by foot and destemmed by hand in a “Ripanço” table. Afterwards the juice, the skins and some of the stems are transferred into the clay pots where they are fermented. The use of the clay pots adds some spiciness to the wines and a 3rd dimension of aromas and flavors. Later in the case of the white wine, it is transferred to a new clay pot and in the case of the red wine, it ages partly in chestnut casks and the rest in the clay amphorae. This is na artisanal and natural process, like the wine that it gives origin to.