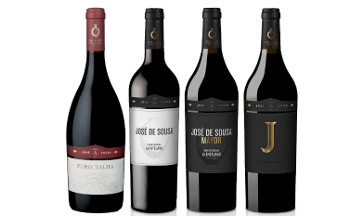 The prestigious magazine Wine Enthusiast in its November issue, rates four wines from the José de Sousa winery: the Puro Talha 2015, José de Sousa 2016, José de Sousa Mayor 2015 and the J de José de Sousa 2015. With 94 points, the highlights are the J de José de Sousa and the José de Sousa Mayor 2015. Wine Enthusiast describes the J de José de Sousa as “the red juice of the Grand Noir grapes that dominate this wine give it a dense colour as well as the sense of powerful tannins. It is rich, well balanced with spice and black-currant aromas and a structured, fruity palate.”. Regarding the José de Sousa Mayor, the publication refers to it as “partly fermented in clay amphora, this wood-aged wine is dense and impressively concentrated. Powerful tannins accompany the juicy black fruits and acidity, pointing towards a long-term future.” About the José de Sousa, which has a rating of 93 points, Wine Enthusiast highlights: “this rich, full wine is firmly anchored in ripe tannins. It has concentration and a dense texture layered with black fruits and acidity. Partly fermented in clay amphoras, the wine has a particularly juicy edge as well as freshness”. Finally, the Puro Talha 2015, with 92 points is a wine “Fermented in a clay amphora and then aged partly in wood, this fascinating wine is packed with fruit. It has a richer character than its alcohol would suggest, dense and ripe but with only the lightest of tannins.”. This range of wines aims to continue the heritage of the Tinto Velho José de Sousa 1940, a mythic wine of the Alentejo. The wine production at the José de Sousa winery dates back to 1878 and the basis of the wine profile relies on the ancient and rare vinification using clay amphorae. The acquisition of this winery in 1986 by the Soares Franco family, enabled important investments in the recovery of the clay pot vinification and providing a new life to one of the oldest and most prestigious wineries in the Alentejo. Technical Information: JOSÉ DE SOUSA JOSÉ DE SOUSA MAYOR J DE JOSÉ DE SOUSA PURO TALHA TINTO